*Personal endorsement* I LOVE the first book in this series (and am getting around to reading the other two, I swear, there's just NO TIME) so I am super excited to share that book 4 in the Spiral Defender Series is going to be out soon! Check out her gorgeous cover and make sure to keep an eye on that release date! 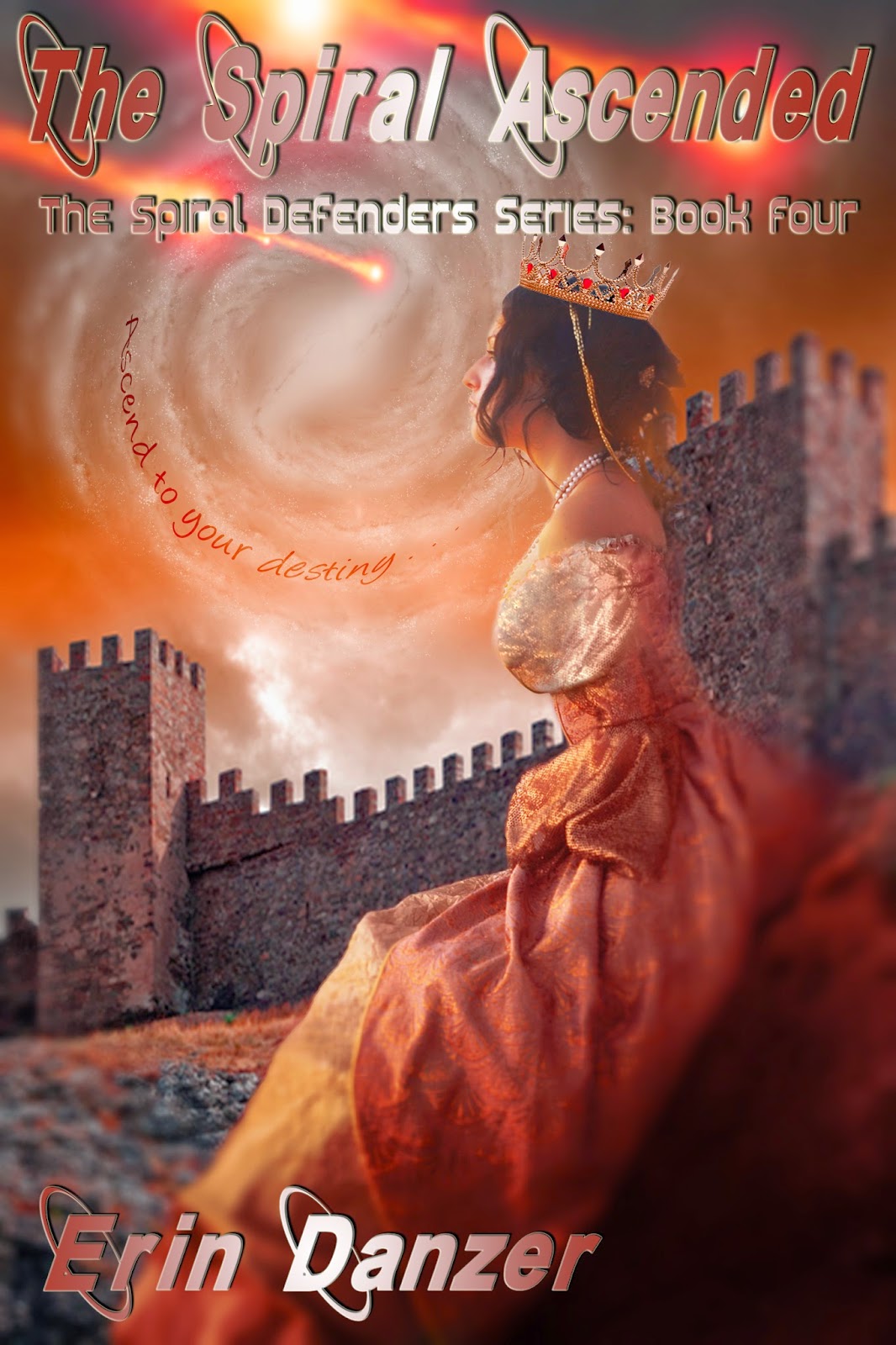 Everything seems perfect now that Ronnie is married. She can be crowned and finally defeat the evil that infests the Spiral.

Until Rick and the Irradians seize the castle.

Now, Ronnie and Gavin are in hiding. They must amass an army from those still loyal to them and protect their friends and family—all without leaving their refuge. When Ronnie ventures out, Gavin is captured. Their bond is severed. All Ronnie knows is that Gavin is still in her heart.

Until that breaks, too.

Ronnie must find the strength to ascend to her destiny and defeat Rick or risk losing everything forever.

It was Ronnie’s turn to blush bright red. “I haven’t really wanted to,” she admitted. “Plus, there’s the whole ‘no door’ thing that bugs me. It’s not like you guys can call first to make sure you won’t interrupt something.”

“I can help with that,” Gem exclaimed and jumped up from the bed as Katja laughed.

“You obviously haven’t looked too closely in that bag I packed you,” Katja teased Ronnie. Ronnie waved her off, her words barely registering as she watched Gem. The elf stood in front of the opening into the rest of the cave, studying the rock formations that created it.

Then, Gem raised her arms and said something in a language neither girl understood. Ronnie and Katja screamed a moment later when the ground shook beneath them. Ronnie’s eyes widened with fascination as the opening shrunk to the size of a wooden door, which also appeared. She looked in awe at Gem as the elf collapsed back onto the bed a moment later. Dust and small rocks rained down from the ceiling as everything settled into the new formation.

“Princess,” Gavin called, his voice frantic, before he and Will burst through the door into the newly created room.

“What was that?” he asked. Ronnie grinned up at him.

“Gem gave us a door,” she replied.

“A door?” He turned and looked at it, his dark eyes taking in the new structure of rocks and wood.

The blast came out of nowhere. Ronnie barely had time to brace herself before the blue energy hit. Her sword flew from her hand, leaving Ronnie defenseless. She called upon the elements, concentrating on the gremlins’ spears. The weapons cracked and broke all around the room. Gremlins screeched as they scrambled for new weapons. Ronnie tried to reach out to fling a fireball, but nothing happened. Panic flared within her. Instead of the energy that always tried to escape after a blast, cold numbness swiftly moved through her.

Gavin! She screamed in her mind. Instantly, he was there, hacking through the goblins that blasted her, thinking if they died the paralysis would fade. No such luck. He got through the last of them, and still, Ronnie couldn’t move. She saw him glance behind her even as he lifted his sword to deflect the spear of another gremlin. The wave seemed nonstop. Ronnie desperately tried to move, but her body wouldn’t listen.

You need to use my magic, she thought to Gavin.

Are you sure it will work?

We have no choice.

Ronnie pushed her powers at him through their bond. Andi and Shawn huddled against her back as Gavin let loose a gale-force wind in the room. Gremlins and goblins screamed and grunted as they flew off their feet. Before they could recover, Gavin threw fire at them. Screeches and growls filled the room as most of the creatures burned. The ones left created a portal and jumped through it before Gavin could get to them.

As soon as the last Irradian disappeared, the paralysis broke. Ronnie stumbled forward with a gasp. Andi and Shawn reached out to each grab an arm to keep her on her feet. Gavin immediately took her into his arms, crushing her against his chest. After a moment, she pushed back to an arm’s length and his hands ran down her body, looking for injuries. Ronnie pushed his hands away, ignoring the way they made her feel. She couldn’t think about that right now.

“I’m okay,” she declared when Gavin continued his perusal of her body. When his eyes wouldn’t stop searching, she reached up, cupped his face in both hands, and forced him to look at her.

“I’m okay,” she repeated with more force this time. Relief poured through her as Gavin gathered her into his arms once more. She only stayed there a moment before turning to her friends. Andi huddled in Shawn’s arms, her blonde curls bouncing as she shook. Ronnie reached out and put her hand on Andi’s shoulder.

“Are you guys hurt?” she asked. She had no idea what to say. How could this even happen? Anger filled her veins as she thought about Rick trying to take her two best friends from her. How dare he!

“No,” Andi said, her voice small. She turned wide blue eyes up to Ronnie. “How did they find us?”

Ronnie clenched her hands into fists as she struggled with the anger steadily building within her. If she didn’t calm down, she would teleport again, but she couldn’t let this go unanswered. Rick needed to pay. They needed to hurt him worse than he almost hurt her.