It's cover reveal time!
This upcoming release is L.C. Miller's debut novel, and the cover definitely has me intrigued! 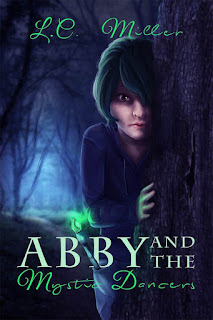 As the product of a forbidden alliance between the elemental Mystics and the wand carrying Wielders—two distinct, often feuding, magical realms—acceptance is something fourteen-year-old Abby has fought with for the last four years. When an alliance is formed between the Mystic Dancers and the Wielder’s, Abby is given the chance to live with a Wielder’s family and attend Wielders Academy of Magical Arts. In order to do so, she first has make three promises to the Mystic Dancers leader … Tell no one she's half Mystic, that her father is a Wielder who is also a wanted criminal, or that she can transform into anything she wants.

Her day-to-day life of secrets, school work, and dancing is interrupted when her mother’s murder case goes to trial. The Mystics believe they finally caught the killer, who happens to be the father of one of Abby’s new friends. Abby has a choice to make – reveal her secrets, or let a man she knows is innocent go to prison.


The release date is November 9th, 2015, so keep this one on your radar and don't forget to drop by her Facebook page!