Do you know about Heather Lyons? How about that she has a brand new book out (that came out in October!)? No? Oh good, then I'm not the only one running a little late these days! Have no fear, you can still pick up a copy and it will still be just as good, and she will still love you. It's like a getting a birthday card a week later, a nice little perk!

THE COLLECTORS’ SOCIETY is an Adult Romantic Fairy Tale, full of adventure and fantasy. This is Alice as you have never seen her before...

Cover design by Victoria Faye of Whit and Ware

From the author of the Fate series and The Deep End of the Sea comes a fantastical romantic adventure that has Alice tumbling down the strangest rabbit hole yet.

After years in Wonderland, Alice has returned to England as an adult, desperate to reclaim sanity and control over her life. An enigmatic gentleman with an intriguing job offer too tempting to resist changes her plans for a calm existence, though. Soon, she’s whisked to New York and initiated into the Collectors’ Society, a secret organization whose members confirm that famous stories are anything but straightforward and that what she knows about the world is only a fraction of the truth.

It’s there she discovers villains are afoot—ones who want to shelve the lives of countless beings. Assigned to work with the mysterious and alluring Finn, Alice and the rest of the Collectors’ Society race against a doomsday clock in order to prevent further destruction . . . but will they make it before all their endings are erased?


Heather Lyons has always had a thing for words—She’s been writing stories since she was a kid. In addition to writing, she’s also been an archaeologist and a teacher. Heather is a rabid music fan, as evidenced by her (mostly) music-centric blog, and she’s married to an even larger music snob. They’re happily raising three kids who are mini music fiends who love to read and be read to.

I can't lie, every year around this time I get pretty sappy and sentimental. After shifting my focus from "soon it will be a new year, what will I do?" to "it's been a year, what did I do?" some pretty big changes have happened in my life. (and yes, I realize it's only Dec 2nd, but if this year is any indication, this month is going to be over before I know it!)

While my first thought is that 2014 was a pretty non-exciting year, if I actually look back, it's been anything but boring. No wonder it seems like I was just celebrating the incoming of 2014 and then BAM, we're now walking down the sidewalk to head into 2015.

Because I like to share, and because I'm nosy about what everyone else did last year, here are some of my highlights.

In March, I attended my second Cascades Library Local Author Fair. Once again it was a total blast, and I thoroughly look forward to this years. 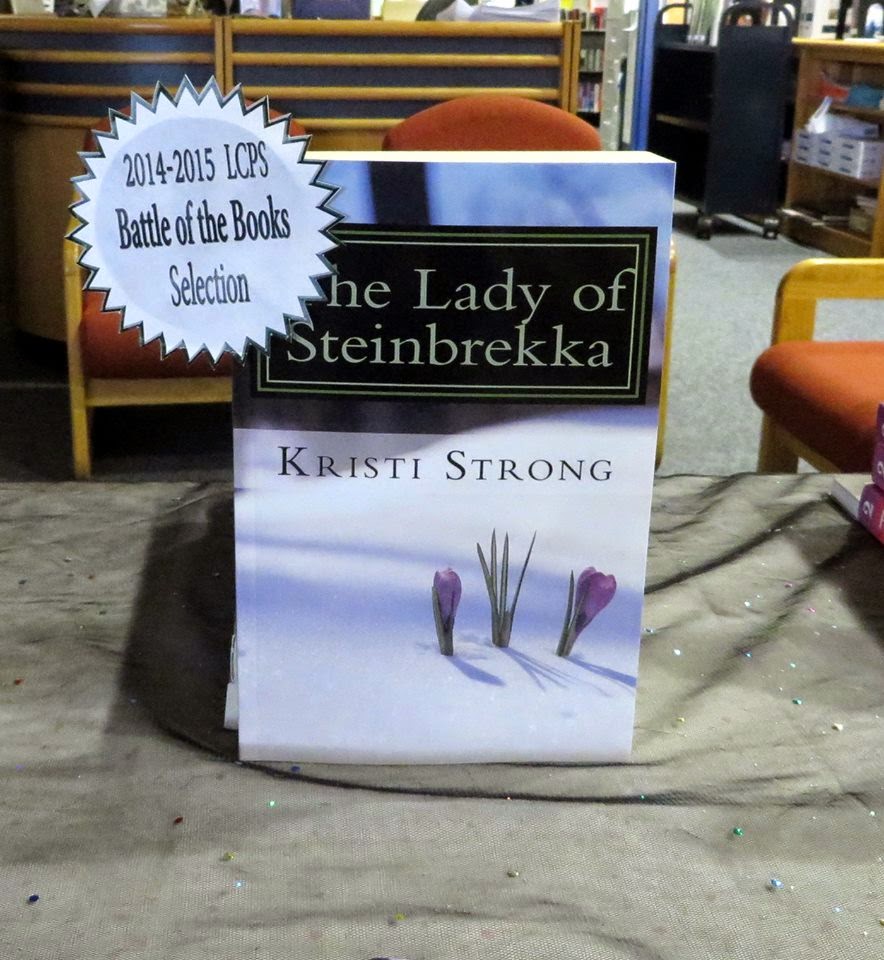 In April, I received the official notice that my debut novel, The Lady of Steinbrekka, was going to be part of Loudoun County Public Schools Battle of the Books competition! This is an amazing competition where teams of high schoolers have to read 10 specific books, 1 of each genre (mine is fantasy), and then compete in a district wide tournament to see who knows the books the best. It is a very surreal feeling to have my book in libraries, and to walk down the hallways at work and suddenly here, "OMG that's her! That's the person who wrote the book!" from teens who have been reading it.

They also asked me to be the guest speaker at the 2014 BOTB competition. While I am terrified of public speaking and get very anxious at new situations, once I started talking (and the kids laughed at one of my very bad jokes), I was able to relax and it was a blast. The team who attended the hosting school even stayed with me for an hour after the competition was over just to ask questions about self publishing, writing, and what it was like to have a published book.

I also took my first step on my pathway to change when I signed up for an online course through the AAPC to get my certification in medical coding. This is what caused me to go quiet for most of the year, because my nose was buried in very large books with very large words.

July brought my newest book baby to the world, Finding Keepers! This was actually one of my hardest books to write, even though I set out thinking it would be the easiest. Then my main character because a foster child, and I spent a good 6 months researching foster care so that I would do her justice and get it right. While this book is YA, it is also a very emotional read, and I have to confess, it was just as emotional to write.

August brought a whole new set of challenges (and pure awesomness) in the form of Believe, Hope, Live. This event was put together by D. Love and brought authors from around the country to Augusta Georgia for 2 days. I had the luck of driving from VA to Maine with the wonderful Kristina Circelli, and it was possibly the best road trip ever (especially since I just did the exact same trip a month earlier with my husband and 3-year-old, much different road trip!). After only 12 hours (and five minutes of not being able to figure out how to get out of a parking lot, you had to be there) we made it. What followed were two days of fun and pushing my social boundaries by meeting a ton of new people (if you ever get a chance to hang out with AE Woodward or Cynthia St. Aubin at an event, I highly recommend it!, and many people I only knew online like Elizabeth Sharp and Laura Howard. I also got to spend 2 days hanging out with Dawn Pendleton (who I technically met for the first time on my first Maine trip that summer) who immediately made me feel right at home.

I was then neck deep in learning medical coding, and dropped even more off the radar as I struggled to juggle my author life with my full-time job, with being a mom, and having to learn all new things (again, really really big words!), but was able to squeeze in a few more local events.

September brought my first "only me" bookstore signing! Chapter 2 books in Winchester VA was so gracious to include me in their opening day celebrations, and it was truly an incredible event. There were so many people and they had a DJ and it was just a total blast. I can't wait to work with them again.

November brought my first ever on-camera interview! Loudoun County Public Schools asked to film a short interview with me about my book, The Lady of Steinbrekka. I was even interviewed by THE Wayde Byard. To most people, he is the Public Relations officer for LCPS, but for all of the workers, students, and parents,  his voice is celebrated every time we hear the words, "Loudoun County Public Schools are closed" on snow days.

I finished my course on Sunday (WOOHOO) and will be taking my national certification in two weeks, so I will totally make it up to everyone.

(and kudos for you if you read this whole thing! Phew, it got long!)
No comments: