Ok, seriously, how is it the end of 2015? How? I could have sworn I just sat down and started planning all of the things that I was going to accomplish in 2015!

And to be honest, it went by so quickly that I feel like I worked my butt off and didn't accomplish anything. In both my personal life and my author life. I know that's not true, but whew, time needs to slooooow down just a titch so I can jump back on this treadmill and not feel like I'm going to go flying off the end all "gym blooper" style.

So come take a journey back in time with me, so I can reflect on the things I DID accomplish in 2015, and then we'll make a plan for next year.

2015 started with a bang, both good and bad. I learned that not only do I have a thyroid problem, I also have a circulatory problem which, after an ultrasound and a CT scan (with contrast. Have you ever had dye injected into your veins? It feels really weird!) I was officially diagnosed as "hypersensitive to stress". Aka, despite the best efforts of my amazing doctor and several top notch cardiologists, there is no other explanation for how I went from very serious narrowing of arteries to completely normal in 3 weeks. What can I say, I like being a challenge.

I also started a new job in January, in a completely different field than before. It was a huge adjustment, but I am still so excited that I made the switch. I think the hardest part has been figuring out the work, author work, life balance with the new schedule, which requires me working more hours and no more Summers/Christmas/Spring Break time off to work on my books. I'll get there, just be patient with me.


Cascade's  Library invited me back, and I was able to meet some new (to me) authors and really enjoy spending time hanging out with them. There was a good crowd this year and it was a blast talking to people so interested in reading and publishing. While I did miss having my table to sprawl (I took the "everything but the kitchen sink" approach in 2015 lol), it really forced me to interact with the people around me instead of hiding behind my books/in my phone.

In April I was able to be at my second Battle of the Books finale along with author Valerie Muller. Our books were featured in the 2014-2015 battle and it was so much fun seeing some of the students and staff of my old school who were attending the battle. Once again, I was amazed by the knowledge the students were able to retain and impressed by the questions the judges created for The Lady of Steinbrekka.

May and June brought a new face to old favorites, as I worked with Elizabeth Sharp to re-do the Kaldalangra series covers (what, a series that looks like a series? No way!). They are absolutely gorgeous and she was fantastic to work with (as always) 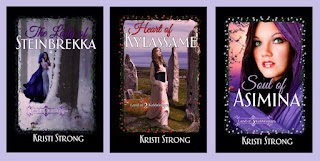 June I really stepped out of my box, when I drove (all by myself, eek!) to Nashville Tennessee to UtopiaCon 2015. It was an absolutely amazing, fantastic, eye-opening time and I am so glad that I went. It was the longest solo road trip I've taken (oh, what's that, check engine light coming on at the halfway point? yay!) and also my first really big convention. I met so many amazing authors, bloggers, and readers and can't wait to do it again in 2016.


Things slowed down a little after that, with me writing here and there, blogging here and there, and generally struggling through health issues again. It was like a little mini emotional hibernation, but like all hibernations, soon I'll emerge from the den. The ideas are still swirling around in my head, but the energy needed to get them out is tapped out. It's coming back though, day by day, ever so slowly, and when it does ...